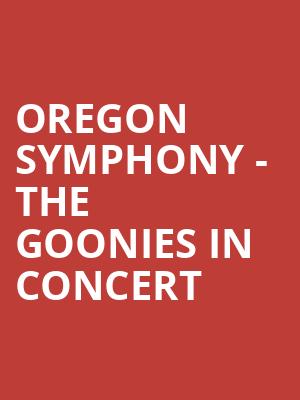 Oregon Symphony - The Goonies in Concert

It's a great, and surprisingly affordable, way to share some 80's pop culture and introduce your family to the arts

Why See Oregon Symphony - The Goonies in Concert?

music from a cult classic

Experience the thrilling soundtrack from the underground classic The Goonies, performed by an orchestra! Oregon Symphony present this performance from Steven Spielberg's influential 1985 adventure-treasure hunt movie, which went on to heavily inspire the modern TV classic Stranger Things and feature across pop culture for decades.

The seminal movie follows a group of kids searching for a hoard of treasure left by the pirate One Eyed Willy in Astoria, Oregon, overcoming elaborate booby-traps and evading a hapless criminal family in the process. The original soundtrack was composed by Dave Grusin and also featured music by The Bangles, Cyndi Lauper and others.

Sound good to you? Share this page on social media and let your friends know about Oregon Symphony - The Goonies in Concert at Arlene Schnitzer Concert Hall.