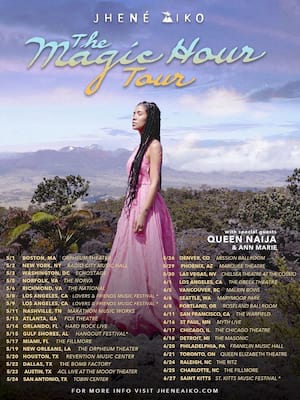 Jhene Aiko is not of this world. Somewhere between pop-oriented R&B and traditional soul, the singer-songwriter floats like an ethereal voice disembodied from typical format and genre distinctions.

Hailing from the City of Angels, rising star singer-songwriter Jhene Aiko cut her teeth recording feature vocals for various artists in the early 2000s and returned to the scene after completing her education in 2011. That very year she released her mixtape Sailing Soul(s), a dreamy compilation featuring the likes of Gucci Mane, Kanye West and Drake. Since her auspicious debut, she's gone from strength to strength, releasing platinum-certified singles like The Worst and Bed Peace as well as her debut album Souled Out in 2014.

Aiko hits the road in support of her acclaimed third album Chilombo, released in early 2020. The coast to coast  Magic Hour Tour sees the soulful songstress hit 30 American cities, bringing along her signature blend of ethereal, pop-tinged R&B. Written and produced in Hawaii, the record was inspired by the island's natural beauty and features singing bowls, blended with spars beats and lilting melodies.

Sound good to you? Share this page on social media and let your friends know about Jhene Aiko at Roseland Theater.