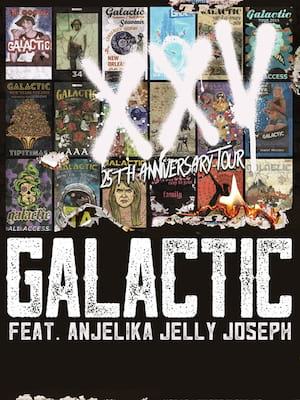 A true sound of New Orleans

For more than three decades, New Orleans based Galactic have been bringing their jazz-funk sounds to fans across the country. Taking their inspiration from the very streets of the infamous New Orleans, Galactic bring a true and authentic sound that evokes the Big Easy with every beat.

With an impressive 12 albums under their belts, Galactic have embraced the fusion of Jazz with other musical genres like hip-hop and rock to create a unique and exciting sound. In 2020, they'll hit the road for an extensive 25th-anniversary tour, bringing vocalist Anjelika Jelly Joseph along for the ride, with support from the likes of Southern Avenue, Chali 2na, Naughty Professor and more!

Some venues are ages 16+ only, check venue before booking

Seen Galactic? Loved it? Hated it?

Sound good to you? Share this page on social media and let your friends know about Galactic at Mcmenamins Crystal Ballroom.