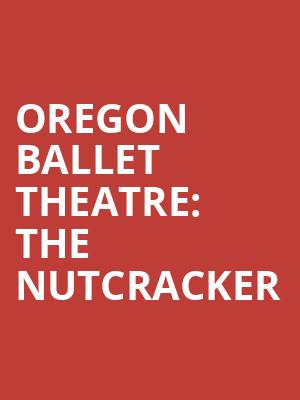 The Nutcracker was danced with such precision, charm, musicality and conviction that even the most jaded viewers found it magical.

Oregon Ballet Theatre is one of only a few companies that perform George Balanchine's version of The Nutcracker annually (the other being New York City Ballet). You're invited to follow our heroine Marie on a wild festive adventure that is filled with toys that spring to life, where snowflakes pirouette and enter a world of sweets, where you'll be treated to no less than 17 dance vignettes! This year, dancers will be accompanied by the full Oregon Ballet Theatre Orchestra performing live for ten performances.

WHAT IS THE NUTCRACKER ABOUT?

Our story starts on Christmas Eve at a fabulous winter ball held by Marie's wealthy parents (Clara is renamed Marie in all Balanchine productions). The party is in full swing when in sweeps the mysterious godfather, Herr Drosselmeyer, a prodigious dollmaker - and some whisper, magician! - with his handsome nephew. Marie, a young girl on the cusp of womanhood notices the young man and is taken with him. As a gift, Drosselmeyer hands out marvellously life-sized dolls who dance and spring about the stage. To Marie he presents a handsomely made nutcracker doll. Delighted with her present, Marie dances about with it, until her boisterous younger brother grabs it and manages to break its jaw. Marie is bereft until Drosselmeyer fixes it, and all is well.

The party ends before midnight, and Marie falls asleep under the magnificent Christmas tree in the parlour. When the clock strikes twelve, she suddenly awakes to see Drosselmeyer flying. The Christmas tree has grown to a tremendous size, and she is frightened. Not least because a seven-headed mouse king has appeared with his army, brandishing weapons. But what is this? A troupe of tin soldiers rush past, led by a handsome prince - who bears a striking resemblance to her Nutcracker. Could it really be?

The soldiers defeat the wicked Mouse King and his army with Marie's help of a thrown slipper, and the Prince crowns her with one of the seven diadems that the Mouse King was wearing. Together they venture off into the darkness on a flying bedstead through the snow.

Greeted by dancing snowflakes in a dark forest, the two heroes are guided to the Land of Sweets, the domain of the kindly Sugar Plum Fairy who honors them with a dance festival as thanks for defeating the Mouse King's army. Treats from around the world gather to put their best feet forward in a colorful and enchanting display of grace and skill.

This is the best Nutcracker performance I have ever seen, The dancers... more

We were very happy with great performances by the whole troupe! Very professionally... more

Sound good to you? Share this page on social media and let your friends know about Oregon Ballet Theatre: The Nutcracker at Keller Auditorium.