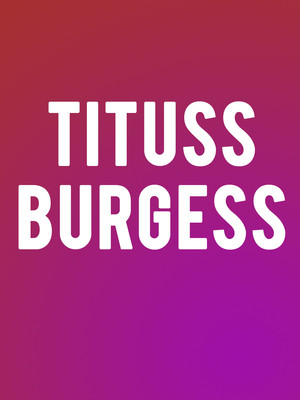 All his clothes double as pajamas

Broadway funnyman and breakout star of The Unbreakable Kimmy Schmidt Titus Burgess comes to town for one night only. Known for his fabulous voice and even more fabulous persona, a night in the presence of Burgess is sure to be something unforgettable.

Starting out on stage in Good Vibrations, he soon went on to originate the role of Sebastian the crab in Disney's The Little Mermaid on Broadway. In 2016 his role as the hilarious showman Titus Andromendon in Kimmy Schmidt brought him to the notice of a wider audience, with the character's 'Pino Noir' song from the show going viral.

In addition to his well-deserved success on screen and stage, Burgess also entertains thousands daily with his side-splitting observations and skits on Instagram.

Sound good to you? Share this page on social media and let your friends know about Tituss Burgess at Arlene Schnitzer Concert Hall.