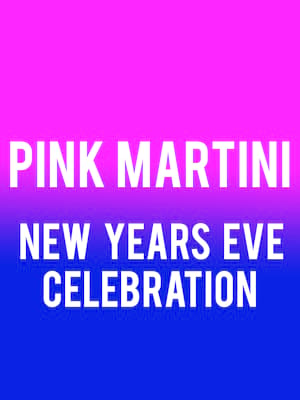 Bring in the New Year with America's premier touring band, Pink Martini! The brainchild of Thomas Lauderdale, Pink Martini have been touring across the nation for the last twenty years, bringing their unique brand of pop music to fans across the country. Don't miss this American institution as they celebrate New Year's Eve in style with an extra special performance in Portland!

With a plethora of studio albums to their name expect to hear Pink Martini's classic hits as well some of the season's best-loved tunes in this totally festive concert.

Since releasing their first single, Sympathique, in the late 90s Pink Martini has collaborated with artists as diverse as Gus Van Sant, The Von Trapp family and Sesame Street. It's impossible to not be motivated by their distinct classical, Latin and jazz-infused output with multilingual lyrics. They are truly a band that can be enjoyed all over the world.