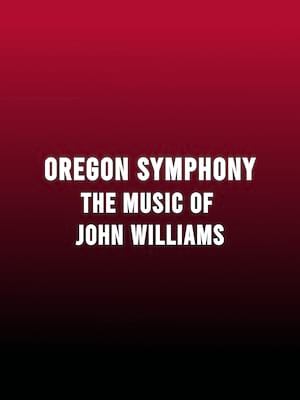 No one has contributed more to modern film music

Why See Oregon Symphony - The Music of John Williams?

A journey through cinematic masterpieces

The Oregon Symphony Orchestra take audiences to the movies in February, with a concert dedicated to the music of legendary cinematic composer John Williams. Featuring epic renditions of pieces from Williams' most famous scores such as Star Wars, Close Encounters of the Third Kind and many more timeless classics.

A true master of the soundtrack, John Williams is widely regarded as one of the all-time greatest film composers. A list of awards too long to count includes multiple Grammys, Golden Globes, Emmys and Academy Awards, for his work on the soundtracks for Jaws, E.T., Schindler's List and others. Conducting the Oregon Symphony is Norman Huynh, whose previous posts include conducting the St. Louis Symphony, Leipzig Symphony and the Princess Galyana Vadhani Youth Orchestra in Thailand.

Sound good to you? Share this page on social media and let your friends know about Oregon Symphony - The Music of John Williams at Arlene Schnitzer Concert Hall.